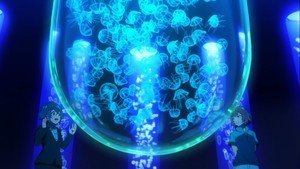 The first cour of The aquatope on white sand closed on a bit of a melancholy note with Fuuka and Kukuru going their own way after an intense few months spent caring for the creatures and fauna of Gama Gama Aquarium. It effectively closed the chapter of the story where our two girls try to figure out who they eventually wanted to be, all while attempting to save a local fixture of the community from its inevitable closure. Now, in episode 13, “Tingaara in the Far Away Ocean”, we’re picking the plot back up with Fuuka and Kukuru hundreds of kilometers away from one another.

As I and so many others predicted, we’ve timeskipped into the future: Kukuru is now living on her own in an apartment, and she’s a new hire at Tingaara. Rather than giving up, she’s pressed on, and now works for an even bigger institution. It’s no Gama Gama, but it is an aquarium, and that’s what matters. Initially, it seems like Kukuru will be working in the same capacity: attending to the animals and caring for them. However, it turns out that Kukuru isn’t working with the animals directly at all: instead, she’s going to be handling PR, which is a far cry from being a director and an animal attendant. In fact, a lot of this episode is spent showing just how much Kukuru’s work in a “proper” aquarium like Tingaara differs from her previous stint at Gama Gama.

There’s a sense of renewed momentum that begins with the OP and carries through the episode, signaling the start of a new phase in Kukuru’s life. She’s not yet who she needs to be, but she feels a lot more fully-formed than the young woman we encountered initially in the first cour. The episode’s pacing reflects this as well; there’s no longer a sense of fumbling that was present in some of the more middling episodes of the previous cour. Instead, we’re starting off with a bang and really solid energy. I’m excited to see where things go from here, especially since we’re now following young adult Kukuru instead of a teenager who’s working at the family business.

One thing of note is the new music direction, which uses a lot of bassoon, clarinet, bass clarinet, and “bass” instruments to play up Kukuru’s unease at being in a desk job versus working with the animals. Mind you, the sounds from the first twelve episodes are still here, but the soundtrack is decidedly different, marking the transition from Gama Gama to Tingaara. It serves to really underscore how different things in Tingaara are going to be, and sets up this second cour to do a lot of dynamic growth for Kukuru.

Oh, and Fuuka, who definitely appears at the end of the episode and renewed my reading of this as a sapphic series, even if that’s probably not the case.

All of this (by this, I mean the character growth, the setup, the general plot) is helped by the still incredibly beautiful animation which… gosh, there’s this section of the episode where there’s no dialogue, just ambient music that highlights the genuine sense of wonder that aquariums often evoke. It’s slick, aquarium sakuga, if there ever was such a thing, except that’s just the baseline for the animation overall. The aquatope on white sand continues to look stunning, even in the most mundane moments of this episode.

Episode 13 is beautifully optimistic while also remaining very grounded in establishing this new pace for the series. It really feels like it’s transitioning into a “working women” kind of series from the string of incidents and stories that characterized the first cour, which, at times, weakened the story that I think aquatope is trying to tell. Hopefully, by shifting things into a different gear, we’ll get a really empowering, powerful story that’ll come full circle, regardless of whether or not Gama Gama is ever a thing again. Call me curious, and certainly call me invested: I was already ride or die, but now? I’m wholeheartedly into The aquatope on white sand, come what may.


The aquatope on white sand is currently streaming on
Crunchyroll.


Mercedez is a JP-EN localization editor & proofreader/QA, pop culture critic, and a journalist who also writes for Anime Feminist, where she’s a staff editor, and But Why Tho?. She’s also a frequent guest on the AniFem Podcast, Chatty AF. When she’s not writing, you can find her on her Twitter or on her Instagram where she’s always up to something.