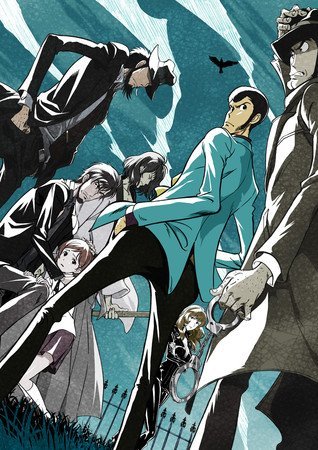 HIDIVE announced on Tuesday that it will begin streaming the Lupin the 3rd Part 6 and Shikizakura anime on Saturday for the fall 2021 anime season.

Sentai Filmworks describes the story of the new anime:

Gentleman thief Lupin III is back and ready for his next caper— unless legendary sleuth, Sherlock Holmes, has anything to say about it! When Holmes’ longtime partner, Dr. Watson, is murdered, none other than Lupin tops the suspects list. With Holmes fast closing in, Lupin must prove his innocence and bring a shadowy organization called The Raven to heel if he wants to live to steal another day.

The new series will center around two keywords, with “mystery” being the keyword of the “first cours” (quarter of a year). The thief Lupin is after a treasure hidden by The Raven, a mysterious organization that manipulates the British government in the shadows. However, the detective Sherlock Holmes appears before Lupin.

The series will premiere on the NTV channel in Japan on October 9 at 24:55 (effectively, October 10 at 12:55 a.m.), and it will also run on NTV‘s affiliates as well as on Hulu and other streaming services in Japan. Sentai Filmworks licensed the new series for home video and streaming in North America, Australia, New Zealand, Scandinavian countries, and all Nordic Countries.

The new anime’s original soundtrack, featuring the latest new arrangement of the theme song by franchise veteran Yuji Ohno, will go on sale on November 3.

The new season will commemorate the original anime’s 50th anniversary.

Eiji Suganama (Lupin III: Prison of the Past) is directing the series at TMS Entertainment. Takahiro Ōkura (Lupin the Third: Part 5) is in charge of the series scripts. Hirotaka Marufuji (Lupin III: Goodbye Partner) is designing the characters. Yuji Ohno (Lupin III) is composing the music. The late Monkey Punch is credited for the original work. 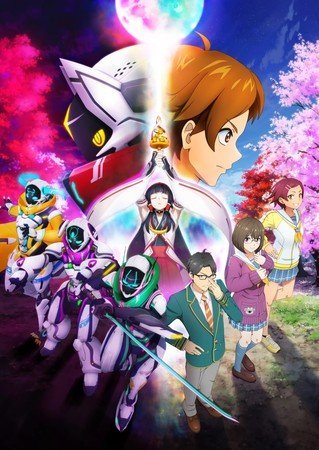 The anime will premiere on Saturday on Chukyo TV at 1:55 a.m. JST (effectively, Sunday). The series will also air on NTV, Akita Broadcasting System, Fukuoka Broadcasting Corporation, Kumamoto Kemnin TV, and BS Nippon TV. Hulu will also stream each episode in Japan the day after broadcast, followed by other services four days later.

The first episode of the anime debuted on the Anime Expo Lite online event on July 4. Anime Expo describes the anime:

In the place of Shikizakura (cherry trees), where autumn leaves and cherry blossoms are flourishing and where the human world intersects with the demon world, a ritual to save the human world is about to begin…

Kakeru Miwa, a high school student, gets involved in a battle between powered suits and oni that emerge from the demon world to prey on Onis manifest themselves in this world by possessing humans.
Only “Yoroi,” powered suit that is a fusion of ancient secrets and cutting-edge technology,
can protect people from onis. Kakeru puts on a Yoroi by chance and becomes a semi-official member of a team that fights against onis.

Determined to become a hero, Kakeru battles Onis to protect Ouka Myojin, the shrine maiden destined to save the world. In the season of Shikizakura, in midst of autumn leaves and a flurry of cherry petals, Ouka performs a dance as a shrine maiden. At the place where the past and the future, this world and the alien world, people’s thoughts and hopes all meet, a tale of heroic action-adventure begins!

The anime is set in the Tōkai region, and most of the series’ main staff members are based in the area. Shin’ya Sugai (Walking Meat) is directing the anime at Sublimation (Love Live! Sunshine!!, Ghost in the Shell Arise, Yamato 2202 CG animation), with Tomoyasu Nishimura (Maria the Virgin Witch, Moribito – Guardian of the Spirit) as producer. Both Sugai and Nishimura are board members of Sublimation. Ryōga Inoue (K&K Design) is credited for character designs, and Manabu Nakatake (Sket Dance) is designing those characters for animation. Takumi Saitou is credited as both composer and sound director.

Bài trước Re:Zero Lost in Memories Smartphone Game – The Good and Bad So Far
Bài tiếp theo Classroom of the Elite Vol. 1-2: Justice Even For the Undeserving