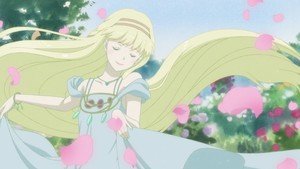 The last woman in England to be burnt at the stake was Catherine Murphy in 1789. Her crime was “coining,” an archaic word for counterfeiting. The following year, burning at the stake was officially abolished as a punishment. All of this is to say that Helena de Armoises could certainly have been punished for her much greater (in time period terms) crime of absconding with the king’s bastard child; in fact, it might have been considered a more “seemly” form of execution – women were often burned rather than hanged or drawn and quartered, because it didn’t expose their bodies. Disgustingly enough, one theory states that the kicking of the legs of the hanged could “elicit obscene fantasies” from men in the audience. (Source: The Hanging Tree by Vic Gatrell, 1996.) The fact that Helena was alive when she went to the stake suggests that the year is prior to 1726; after that, women were strangled before they burned.

Not that Fena: Pirate Princess is a bastion of historical accuracy, because Abel’s clothes definitely suggest that we’re closer to the 1770s. But Helena‘s horrific death and her “crime” do shed a lot of light on why Abel is the way he is as an adult. While I’m not suggesting that we should forgive him for his dogged pursuit of Fena or his creeptastic ways with her – which is even more upsetting when we consider that she’s very likely his half-sister – it does make him a bit less two-dimensional. Much like Shitan is driven by his complicated emotions for Yukimaru and his difficult childhood with Kei and Yukihisa, Abel is a product of his own youth. He’s mostly likely another illegitimate child of the king (I’m assuming of England, though I suppose it could be France), as he says that he’s a prince who can never be king. He seems to have spent his childhood wandering the exquisite grounds of the palace, drawing and painting, eventually meeting a young Helena one rainy day. Whether she’s in love with him as well before she’s more or less forced to elope with Fena’s (nonbiological) father is up for debate, as is her role in the palace; she seems likely to be the daughter of a lady-in-waiting. But watching his love burn after finding out that she was having his father’s child – and probably not from a consensual encounter – is enough to break Abel. He takes her words about waiting for him in Eden as possibly more than she intended, and that’s what ends up driving him to the point he’s at when we meet him.

It doesn’t excuse him, but Abel is a broken man. I’m not one hundred percent positive that he really understands that Fena is probably his sister; he looks at her with her cropped hair and just sees Helena in the cell before burning. Fena symbolizes both his lost love and the one hope he’s held onto of seeing her again, the idea that “Eden” is a real place he can find rather than Helena speaking prettily about an afterlife. Certainly Helena seems to have imbibed the Kool-Aid about Eden when she’s in the cell, because she makes reference to sleeping with a king to birth La Pucelle (kind of weird, since Jeanne d’Arc was a peasant), and the song Fena remembers her father singing to her suggests that there is a real place she’s meant to go to. But that’s where we have to remember the whole El Dorado thing, because Abel could be conflating the myth of the golden city with Helena‘s talk of Eden, and that idea, which O’Malley would have heard from him, has started to spread.

All of that makes it fitting that this season feels like it’s gearing up to end when Fena and her merry band reach the land at the end of the coordinates. Eden is, after all, the place of beginnings; in Abrahamic religions it’s the first home of humanity, and of course the parents of Cain and Abel. (Does that make Fena Cain? I wouldn’t put it past this show.) Since the riddle was solved by thinking about the key words “vice versa,” that makes the end the beginning if they wind up at Eden/El Dorado. That feels very much like the sort of thing this series would do, especially since we don’t feel anywhere close to a solid conclusion to the story. Hopefully it will all make some sort of sense in the end, and if the rest of the show can be as gorgeous as Abel’s flashback, I can overlook some of the more egregious bits of the storytelling.


Fena: Pirate Princess is currently streaming on
Crunchyroll and broadcast on Adult Swim.

Bài trước “I Tried Thinking About the Common Isekai Slave Circumstances Realistically”
Bài tiếp theo How a Realist Hero Rebuilt the Kingdom, Possibly at the Cost of His Soul